The overall theme of our lab is the regulation of energy homeostasis in mammalian systems, with special reference to adipose and muscle tissues. While we have long been interested in diabetes and obesity, our current interests extend to muscle disorders, neurodegeneration and cancer cell metabolism. We are particularly interested in mitochondrial metabolism in these disorders and in the development of novel therapeutic approaches. We work at both the biochemical and physiological levels, employing cultured cells and in vivo murine models.
​
The following are current research areas:

PGC1α and the control of energy homeostasis
We discovered the transcriptional coactivator PGC1α in 1998 [1].  Work from our lab and others has demonstrated that this molecule is a dominant regulator of mitochondrial biogenesis in most tissues and is conserved from humans to flies.  Complex regulation of PGC1α and its multiple isoforms allows it to control not only cellular mitochondrial levels, but also tissue-specific mitochondrial functions [2].  These features of PGC1α enable animals to adapt their energy metabolism to dynamic environmental and nutritional settings.  We are currently taking biochemical, genetic, and evolutionary approaches to explore new modes of PGC1α regulation, including regulation of mRNA translation as well as post-translational modification of the protein itself [3].
Creatine futile cycle and metabolism
We have described a pathway, originating from our unbiased proteomic work, in which creatine and phosphocreatine are in a futile cycle, dissipating the high energy charge of phosphocreatine, without performing any mechanical or chemical work. Like UCP1, this pathway is downstream of the canonical adrenergic signaling pathway in thermogenic fat [1]. Critically, we have provided biochemical, pharmacological and genetic evidence that this pathway is a major component of adipose tissue thermogenesis [1,2,3]. Currently, we seek to answer critical questions about the futile creatine cycle regarding biochemical steps in this pathway that are still not understood. Additionally, we will determine, using genetic tools, the contributions made by this cycle to whole body energy expenditure, under a variety of physiological conditions experienced by both mice and humans.

1. Kazak, L., et al., A creatine-driven substrate cycle enhances energy expenditure and thermogenesis in beige fat, Cell, 2015, 163(3):643-655.
2. Kazak, L., et al., Genetic Depletion of Adipocyte Creatine Metabolism Inhibits Diet-Induced Thermogenesis and Drives Obesity, Cell Metabolism, 2017, 26(4):660-671.
3. Kazak, L., et al., Ablation of adipocyte creatine transport impairs thermogenesis and causes diet-induced obesity, Nature Metabolism, 2019, 1:360-370.
PPARγ in cancer biology and cancer treatment
​      There is increasing interest in the overlap between obesity, diabetes and cancer, which has led to interest in exploring the role of therapeutics for metabolic disease in cancer treatment [1]. We have shown, over many years, that drugs that modulate PPARg can slow down the growth of tumor cells in vitro and in mouse models of cancer [2, 3]. More recently we have shown that PPARg ligands can synergize with cytotoxic therapies to increase DNA damage accumulation and cell death [2,4-6]. We are trying to understand the mechanisms of these striking effects and how this can be leveraged in human cancers. 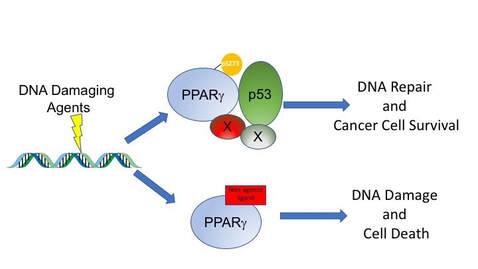